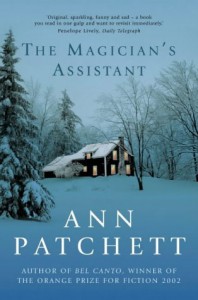 Whew. I've been muddling through 2 and 3 star books for a while; it was quite a relief to find this beautiful specimen. I have State of Wonder on my to read list and was browsing stacks in the library by author and figured I'd pick up something else by Patchett to see what I thought. And I loved it.

This book was very compelling, beautifully written, amazingly perceptive, funny, and wise. The characters were complex, the plot unfolded well, and I really only have one very small criticism.
I thought the two boys (How and Guy) were not consistently portrayed. They are supposed to be in 9th and 11th grades (making them roughly 14 and 16) and yet, most of the time they were described (at least emotionally and mentally) as about 9 and 11 (I mean really, they can't just go home after school and be alone, they still need their grandma to babysit them???); then, at the very end when Kitty and Sabine are looking through their rooms to pack, Sabine finds a roach on the floor. What? They are smoking pot? When? They are never home alone!

On the other hand, the unraveling of the romance between Kitty and Sabine was great. I had it pegged the morning after Sabine's first meeting with Kitty when she comes out into the living room to discuss things with Dot and she just can't stop thinking about Kitty's beautiful face and how much she resembles Parsifal. After just having watched 12th Night at the local Shakespeare theater, I had sibling switcheroo in my head and maybe guessed this sooner than other readers might. Either way, Patchett unfolds it beautifully and it is completely understandable from a psychological perspective.

I loved the subtle revelation of Howard's relationship with Kitty. At first I was convinced that he was very abusive (Patchett sets the reader up with Kitty's inability to make dinner on Sabine's arrival) and controlling, but as it developed I understood him to be less abusive in the sense that Albert was abusive and more violent natured. I am not saying he's not a prick and certainly in the last scene with the knife the reader is given a glimpse of the harm he might be capable of inflicting, but he is not just an abusive jerk. He is a complex character; he is a bully with no real self esteem and in his own way is upset at the very real possibility that his wife is actually going to leave him this time. He understand the complexities of the relationship between Kitty and Sabine and feels threatened. I was so pleased that this minor character was not just a stereotype place holder, but also has depth and complex angles.

Really, there was hardly anything here that did not please me in some way (almost unheard of if you've read any of my other reviews). I have three worth quotes below:

"Having come to find there was no comfort in getting what she wanted, what she wanted now was something else entirely." Great concise quote on human nature.

"For twenty-two years Sabine had told her stories to one person, so that the action and the telling had become inseparable. What was left was half a life, the one where she lived it but had nothing later to give shape to the experience." As a new widow, Sabine does not know how to live without having Parsifal there to reflect her own experience back to her. Again, concise and beautiful.

"You never told because people wanted so desperately to know. They wanted what you had and therefore what you had was all the power. Who would give that up? What possible benefit could there ever be in telling? A minute of gratitude and then the dull falling away, the boredom that always followed knowledge." Not only true in relation to the revelation of magic tricks, but also the human inability to achieve satisfaction. It goes great as a concept with the first quote above...all that ever happens once you get something (an object, knowledge, or love from the unattainable) is that you find a new thing to want.

This is a beautifully written, compelling and complex work that manages to be witty at the same time.
Tweet